Here we are once again, it's Saturday once more. This week our challenge hostess is the very talented Michele Boyer. She would like us to use this sketch. 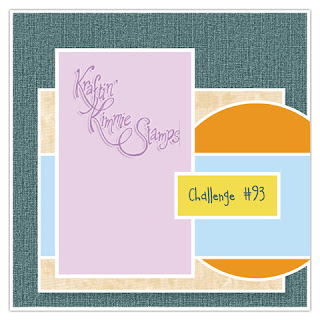 It's a great one and I had fun using it. For my card, I used Billy Blyth, the pirate. I have a soft spot for Billy because my daughter Kraftin' Kimmie named him after my grandfather who was actually a deep sea fisherman and spent most of his life in the North Sea off England. His name was Blyth, as was my maiden name, but as his first name was Richard, Kimmie decided Billy Blyth sounded more piratey. I have to agree. 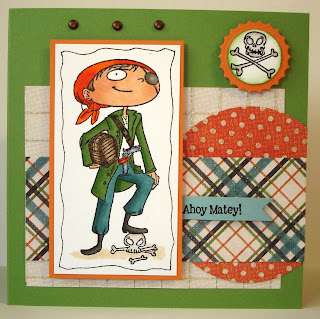 As always, I coloured Billy with my trusty Copics, I doodled around the image, then framed it using some pumpkin pie card stock. I followed the sketch using these patterned papers, which I love, but I don't know what they are called. Kimmie and I share our papers a lot, but it wasn't till a short while ago that I got smart enough to put the name of the papers in with them before I bring them home. Anyway, I used the sentiment 'Ahoy Matey' from Kraftin' Kimmie's Pirate Sentiments, stamping it on Baja Breeze and cutting it flag style, then bent it a bit and popped it up next to the image layer. I then stamped the skull and crossbones, which actually comes with Cutthroat Lizzie (A Jolly Roger Flag comes with Billy) and punched it out with a circle punch, sponged around the edges with Wild Wasabi, then I used one of my Inverted Scalloped Circles to cut out a pumpkin pie frame to go around the skull and crossbones. I added 3 copper brads above the image layer and that's all there was to it. The card base is Wild Wasabi.

So there you have it. Your challenge for this week is to follow Micheles' fabulous sketch. Why don't you give it a try. Then link your card up to Kraftin' Kimmie's Challenge Blog for a chance to win whichever stamp Michele has used on her card!

Also, remember Kimmie's Frugal Friday Specials, which always run from Friday till Sunday. This week the stamps are Bicycle Miles, Francesca, Barnacle Brad, Daphne, Henri and Forget Me Not Fairy. All are 40 - 50% off. 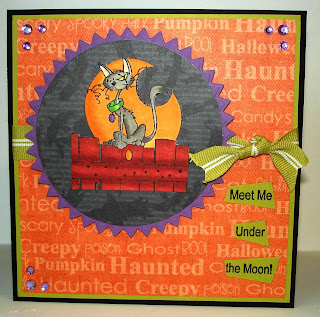 It's time once again for a fabulous Kraftin' Kimmie Release.

As you’ve seen over the last few days in our Krafty Peeks, we have lots of SPOOKTACULAR new stamps for you to play with for HALLOWEEN! There are three new ADORABLE LITTLE WITCHIES from Cheryl Alger, five new HALLOWEEN FUN stamps from Emilie Goulet and six awesome new BATTY PRINCESS AND FRIENDS stamps from Annie Rodrigue!!

You will get to see most of the new images today as you sit back and enjoy our KREEPY Krafty Hop! If you want to start from the beginning, just head over to the Kraftin’ Kimmie Challenge Blog! As you hop from blog to blog, be sure to leave a comment at each and every stop because some lucky stampers will win packages of these frightening stamps from the new release!! And when you’re done hoppin’, be sure to head over to the Kraftin’ Kimmie shop, because ALL the new images are NOW available!

And of course, as always, we have our Gimme Kimmies Kits available for those of you who ‘need it all’!! The stamps are grouped together by artist and are available at a discount, but only for a limited time!!

I've used Kreepy Kitty for my card, I love the disgusted look on his face. I don't think he looks creepy at all, just totally ticked off! I had fun colouring the image, then I cut it out and adhered it to a circle of 'crowy' (or are they ravens?) grey and black paper. I made a frame from Elegant Eggplant, cut out with my Pinking Nesties, then set it on some more Hallowe'en paper. I matted that onto some Kiwi Kiss cardstock, then onto a black card base. I used some Kiwi Kiss Ribbon, cut out the sentiment 'Meet Me Under The Moon', from Kraftin' Kimmie's Hallowe'en Sentiments and attached it in pieces on the right side. I added a few purple gems and that's it. The sentiment that comes with Kreepy Kitty is ' Have a Purr-fect Hallowe'en, but I thought that the moon one fit nicely too.

Now onto the hop. Don't forget to start at the Kraftin' Kimmie Challenge Blog so you don't miss anyone. If you have come here from the blog of our totally fabulous Melanie, then you are where you are supposed to be. From here you will go to the blog of our wonderful guest Krafty Girl Hannah. Be sure to leave a comment at each and every post for more chances to win some of the awesome new Hallowe'en stamps. 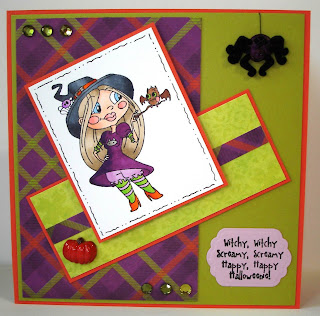 Well, hello again out there! Here we are with some more Kraftin' Kimmie Previews. As I mentioned yesterday, we are showing cards made with the very cute images of our artist Emilie Goulet. To find who has made a card for you to see today, hop on over to Kraftin' Kimmie's Challenge Blog. The image I'm using is 'Haunting Hilda', isn't she adorable, not scary at all. And I love her little owl friend, not to mention the little spider on her hat.

I used this month's Sketch For You To Try. Kraftin' Kimmie Stamps is this month's sponsor, so if you check out the link and use the sketch, you may win some KK Stamps. It's a simple sketch, which suits me fine. I coloured 'Haunting Hilda' with my trusty Copics, then doodled around the outside of the image. I framed it with Tangerine Tango. I used some of my Hallowe'en patterned papers, following the sketch using T. Tango to frame the green strip and also for the card base. I added a cute little spider from my collection. The body is actually purple and matches the purple in the papers, but I can't get it to show in the picture. I added a little pumpkin in a lower corner and stamped the sentiment 'Witchy, Witchy, Screamy, Screamy, Happy, Happy Hallowe'enie' on some mauve to match Hilda's cute little bloomers and that's it. Actually, that sentiment comes with one of Annie's images, which you will get to see in tomorrow's previews. The one that comes with Hilda is 'Have a Spooktacular Hallowe'en'.

Now don't forget to leave a comment at each of the Krafty Girls Blogs who are showing pictures today for a chance to win all 3 Emilie images. Once again, Kraftin' Kimmie will be announcing the winner tomorrow, when we will be showing all the new Annie Rodrigue images. You will love them.

Then on Sunday, be sure to come back for our Krafty Blog Hop, there will be more great cards to see and more chances to win Kraftin' Kimmie Stamps!!

Look forward to 'seeing' you soon.

By Nana Diana - August 19, 2011 31 comments:
Email ThisBlogThis!Share to TwitterShare to FacebookShare to Pinterest 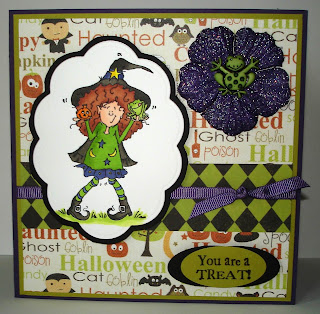 Well, good day all you stampers out there in blogland. Can you believe it's almost time for another Kraftin' Kimmie Stamps Release?!! We Krafty Girls have been having so much fun playing with the fantastic images, which will all go live on Sunday morning........!

We will be showing you Krafty Peeks every day until Sunday, when we will be having one of our super Krafty Blog Hops. Don't forget to drop by and join us for that as some lucky stamper will be winning some stamps from the new release!!

Today we are all showing images from our Krafty artist Cheryl Alger. I love her images, they are so cute and have so much personality. I'm using Surprise Witchy, isn't she adorable with her li'l pumpkin and her froggy? I just love her facial expression. I used some cute Hallowe'en papers given to me by my DD, Kraftin' Kimmie and coloured Witchy in to match them. I cut her out using my Large Scallop Oval Nesties, then I drew around the outside of the die on some black cardstock and cut it out to make a border for the image. I used a lovely glittery flower I bought at Michael's a few days ago and put a little froggy button in the centre. I added some Eggplant GG ribbon across the centre of the green and black strip, then I stamped 'You Are A Treat', which comes with this stamp, on some Kiwi Kiss cardstock, punched it out with my oval punch, then punched out a couple more ovals in black and placed them behind the sentiment.

Now just so you know, Kimmie is going to give away all 3 Cheryl stamps to a random person who leaves a comment on the cards which will all be showing today at Kraftin' Kimmie's Challenge Blog. The winner will be announced tomorrow, so be sure to comment on every blog for more chances to win.

Tomorrow we will be showcasing the fabulous images of Emilie Goulet, so be sure to check back and see what we've all come up with for those.

Happy stamping and I'll 'see' you all tomorrow.

By Nana Diana - August 18, 2011 32 comments:
Email ThisBlogThis!Share to TwitterShare to FacebookShare to Pinterest 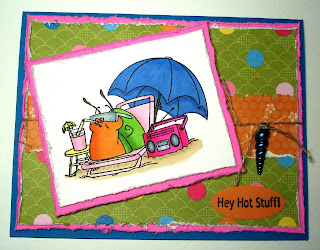 Well, time for yet another Kraftin' Kimmie Challenge. This week, our Hostess is the Magnificent Melanie!! To be honest, I am getting my post ready early as I'm leaving town for a few days. Consequently I don't know what fun stamp Melanie will be using on her card. I do know that whatever she does with her card, it will be a masterpiece!

For mine, I used Stanley the Snail. Doesn't he look like he's having a great time at the beach? I coloured him with Copics, then distressed around the edge of the image layer. I did the same with the Pixie Pink frame. I used a card base of Pacific Point, onto which I layered some patterned paper and then some more Pixie Pink cardstock, both of which I distressed. I put a strip of matching paper across behind the image, used some linen thread across the middle with a shell tied to it. I coloured the shell with my Copics to match the Pacific Point cardstock. It really does match in real life. I finished with the sentiment 'Hey Hot Stuff' from Kraftin' Kimmie's Beachy Sentiments.

Be sure to visit the Kraftin' Kimmie Challenge Blog where you will see all the other distressed cards the other Krafty Girls have made.

Meanwhile, have a wonderful weekend and do your own distressing. If you use a Kraftin' Kimmie stamp and link your card up to the Challenge Blog, you will be in with a chance to win the stamp Melanie is using.

Woohoo!!! Today we are celebrating all the new fabulous goodies in our November Release that are NOW available in the   Kraftin' Ki... 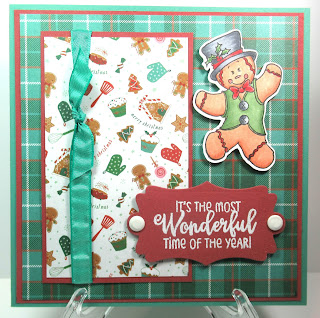